A young man woke one morning in a small Pakistani city called “Sarai-Alamgir”. Where the sun rises after a long restless night.  “Today the sun rises for you”. A voice said, he couldn’t recognize it but it gets him out of the bed to welcome the day as he approaches the nearby window he curiously looked out of it and said, “Surely the sun’s light shone for something more than the daily laborer’s toil. It was because he doesn’t want to go to work nor to the University. He was tired and just wanted to breathe the air, to see the trees and how the wind makes its leaves to rustle. He went for a walk expecting something new to see but all was in vain because the “Bazaar” appears to him all the same as it must have been millions of year ago. The same marketplace hustle and noise. 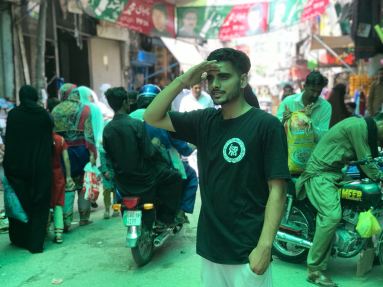 Two middle-aged men were rushing in front of him holding baskets. Women in hijab standing outside the shops deciding whether they should enter or not. The same beggar’s weary faces, the same quarrels and bidding when one man scream from the left “1-kilo Fresh Mangos only for 100 Rupees” then from the right another man would reply, “1-kilo Delicious Mangos only for 90 Rupees”. The Motor-bikes and rickshaws came stumbling and ambling making their way through the streets under the bursting sun. Some young boys holding one another back, shaking with waves of laughter. All the “Rareri wallas” (Morsel sellers) were smacking one another behind and laughing at their jokes, calling one another by familiar nicknames, “gamma , sajja , phaja” such strange Punjabi words were flying in the air while one of them protested with sudden dignity when the others say to him “Look at that morsel seller standing like the  chief “Choudhry” of 32 villages” hahaha they all laughed while others whispering two and two behind their hands.

This was the soul of an artist within him portraying every man in his head and their lives of what he was also a part of. He wishes desperately if he had some paint and a brush, he would have painted it all right away to be titled as the “Bazaar” A place full of people with un-lived lives.

He had never found anything so profound and full of wisdom to teach him as of how to live rather than getting his living and now with just one glance he was thin-slicing faces and found many un-lived lives there. He was aware of his own unsatisfied life and the struggle to live differently from others. He wanted a life without principle. Aimlessly he walks towards the lonely road in heat sweating and whispering something.

But What it was or from where it came he was not sure. On his way he saw a Funeral on the opposite road, it seems to him like flocks of pigeons and he could see how life fly away from them with the fear of death. As he reaches to the bank of a river. The serene atmosphere was in front of him. There was inquisitiveness in the streams which sustains the vitality of life, a great vivacity in the water ripples which rumbles liveliness, a rupture in the tides, so cheerful that the birds chirping on the blissful breeze of the air above, the flow of a refreshing breath of life, fairy meadows and grasslands everywhere.

There he grasped it all of what he was whispering to himself, later on, he paused for a second and said to himself “Life is an endless toil towards a futile end we call death”.  It was not strange that the mere exposure of a busy marketplace can give him a definition of life.