One of the greatest social taboo is to judge the book by its cover. In simple words we never understand a person but are always eager to give our judgments. German writer Goethe while dying on his bed surrounded by his friends suddenly burst out in utter desperation.

“No one has ever properly understood me, I have never fully understood anyone; and no one understands anyone else” ― Johann Wolfgang von Goethe

You can never tell why people behave the way as they do. Since it has become a privilege to undermine a person who is different or unique. Just because someone don’t conform to conventional way of thinking or values we became defensive as why that particular person is not like “us”. If you had a circle of friends and who had similar things to talk about which I do not find interesting, and If I question everything, express my opinions or prefer solitude than partying like others then  you will label me as an outsider, thought criminal, a Liberal or an anti-social.

Ancients Indians thought Earth is Supported on Elephants Standing on a Tortoise. Aristotle for centuries misjudged earth is the center of the universe and it was accepted for decades.

In Greek mythology Icarus thought he could fly with his wax-made wings to the sun ignoring his father Daedalus warning not to fly too high fell into the river and drowned.

We are only humans after all that makes mistakes but we should be capable of accepting our failings to understand certain things.

The need to affirm oneself, to distinguish oneself, to stand out, is a law of nature for every individual; it is his right, his essence, the law of his being.

For many years I suppressed my inner most desires to express my ideas because I fear others will be critical or misjudge me. And it happened in the University when I failed to mold in the Uni friends circle everyone finds another and became the great friends except me who was a loner most of the time.

Some of my class mates starting questioning me saying bluntly, “Why you have no friends? I mean like a one specific person or like our group of friends?”. I replied, “I have been like this all my life, people without ambitions don’t interest me and I spend more time with in my room with nothing much to do than to listen some music, and sometime to read and I do have friends to hangout but I can’t bear to sit with their gibbering words, laughter and petty jokes for long I had this urge to absorb all that in a solitary confinement to cheer up my mind with my own thoughts”.

Recently I finished reading Dostoevsky masterpiece “Notes from the Underground”. The most truthful prolific Russian writer to my soul. He writes in the preface following lines.

“The author of these notes and the notes themselves are, of-course, fictitious. Nevertheless, such people as the writer of these notes not only can but even must exist in our society. Such men will always exist in all generations who will never be accepted in society.”

We all hold terrible secrets that we often fear to share even with ourselves leave the case out of confessing it to others.  And the character in the story is similar to all of us who are misjudged by the people and privately confess the trivialities and find pleasure either in suffering or humiliation there is no such necessary individual ego left in us.

In the words of Dostoevsky

“In the crude unstructured state of society manifests itself in the individual quite crudely and even savagely”.

On Breaking the social Taboo

We must take a hammer and smash the taboo of judging other people based on our intuition. We must accept others as they are instead of manipulating them with our opinions to be able to come into the so-called  general criteria for acceptability.

Now before you Judge anyone please stop! Give yourself some time to know and even if you don’t like someone then don’t criticize or hate because there is always a reason why someone’s behave in a particular way and it takes a lot of courage and patience to accept it the way they are and welcome their sweet indifference of the world. 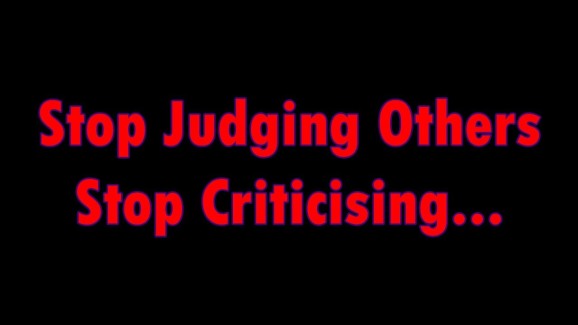