The nature of human existence is finite. I confront death without the need of any eternal reward or Religious dogma. My being is temporal being how simple is that, I will share a brief thought experiment which I experienced for the first time when I was at age of 12. I was sitting at the dinner table holding bread in my hand and I took a bite, I could hear my mouth chewing the wheat, then I felt an inescapable desire for loathing, a strange kind of Nausea, a feeling of heaviness with sweats maybe some sort of a panic attack and It happens in the morning before breakfast and I had to go out to breath the fresh air and then lasted for some minutes to come.  Then there at that moment I have this idea of my own death because during those days someone in my family died and I had seen the Human dead body for the first time in my life. So I started emphasizing on the idea of my own death which I mentioned below in the quotations. This same Idea of existential dread still haunts me to this very day

“I started Imagining in my brains eye that “I” My own very existence along with the soul and body suddenly vanishes. I have eradicated my own very existence. There is nothingness, soon my body is going to shudder, my thoughts will distract. Think “I don’t exist”  now close eyes and take deep breaths, think again I am nobody. Now think if I am dead then “Who are you?” If there is no “I” and no clue of myself and If there is no such thing as me. “Look It is the same old world, the sun will shine tomorrow, people are going to wake up except you, everything will be normal. Look at the world how careless whether you live or die makes no sense, It have no more place for you. Think… Think..Think again.. how can this world be Imagined without “I” in it. No matter how hard I try. There comes a point in my thoughts which is the end of everything. I cant think beyond that I still persist of by being towards death. Then all of a sudden my head started hurting but I keep on pushing my thoughts by imaging a world without my own existence. “I”am dead, I am no more”. I don’t exist but the world is still there and the observer is not “I” rather some Universal Eye it is somebody else not me. There you go, I disappear from the world at that stillest hour, I couldn’t feel anything but the realm of the reality how finite is my existence I cannot even think beyond my own death no matter how hard I try just as I cannot remember anything when I was in my mother’s womb or before that into the nothingness”.

I since that time has been living an authentic life. Being attracted towards the concept of death without the need of any religious doctrine I have been brought up with slowly gone. Death is nothing but nothingness of my own self and I accept it. 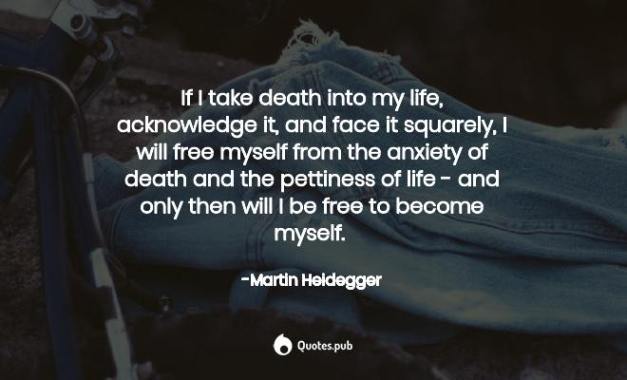 Every man is born as many men and dies as a single one.”
― Martin Heidegger