“I am going to outlive myself. Eat, sleep, sleep, eat. Exist slowly, softly, like these trees, like a puddle of water, like the red bench in the streetcar.”
― Jean-Paul Sartre

“Man is something which must be overcome” is the most powerful statement I have ever read. Nietzsche left a legacy that will last forever. The will to power he shows in “Thus spake Zarathustra”. If we give his work to a beggar and he will became a monk. He will stop begging because it teaches us such powerful idea of a human version, an image of a human alone, fearless, godless, stronger than ever further he wrote,“What doesn’t kill me makes me stronger”. If the modern man survives the death of God, he is the supreme inventor of his own life and he destroys all kind of authority. Man is totally free, he doesn’t have any herd morality but common sense the survival instincts. He has no sense of right and wrong but he simply stands on his firm ground of consciousness and meets life face to face so what If he doesn’t know any divine justice or anyone’s right to tell him what is wrong or right? Because he has the will and it gives him power to judge which in turns questions the world that what does it matter to the world if he did something wrong or right? This is his basic right to do whatever his mind make of it in the end we can say he is the superman. r human now.

A man’s life in this world start in his twenties with the views brought by others and then time soon comes like “Plato’s allegory of cave“ he escapes the dark pit and finds his way into the real world and never stopped laughing again why not? what is man to himself? a mediocrity, chained, not even able to contemplate life on his own.

Heidegger talks about the Ontological concept of being towards death. It negates the concept of death with any eternal cause but as ordinary as human being and his every day ordinary things and his worries are what presents the death as a path to freedom which one must accept and face it broadly.

Sartre: I was free, free in every way, free to behave like a fool or a machine, free to accept, free to refuse, free to equivocate; to marry, to give up the game, to drag this death weight about with him for years to come. He could do what he liked, no one had the right to advise him, there would be for him no Good or Evil unless he thought them into being.”

Camus further puts forward the absurd and irrationality of human mind which often claims of divine messages. Yet always destroying itself like a leach sucking its own blood. The one true philosophical problem of suicide amounts to answer the most fundamental questions of philosophy. His metaphysical rebellion aims at humans to act as a free agent rather relying on God or any supreme entity.

R-O-A-D-TO-F-R-E-E-D-O-M – by Sartre is a great example of french boldness. Frenchmen has always been the most progressive ones in their lives. They are the ones who pushes the human race forward first during french revolution and from then on producing countless amazing minds for which I am thankful. 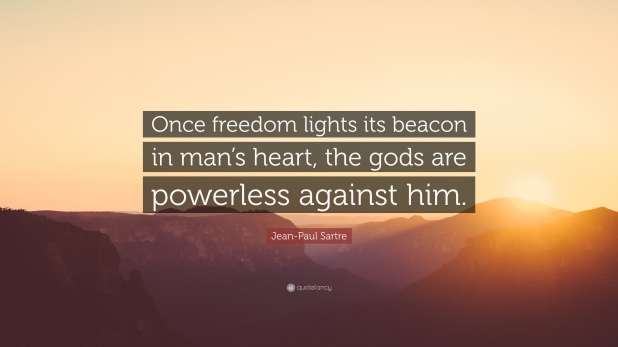 “Everything has been figured out, except how to live.”
― Jean-Paul Sartre